Last week marked the 30th anniversary of Reisopack, the Spanish manufacturer of strapping machines. The occasion was marked by celebrations in Spain, and Steenks Service was there to join the party! After all, when you’ve worked with a partner so closely for so many years, it’s nice to offer your congratulations in person.

Strapping machines – an innovative solution to a common problem

For many years, strapping operations in the fruit and vegetable industry were carried out by hand – growers attached their produce boxes and crates to designated pallets with strings. This meant that produce falling from pallets was a fairly common occurrence. In some cases, the string simply wasn’t strong enough, and in others, the grower’s knotting skills were not up to par. The horticultural industry was also beginning to expand and the costs of fallen and unsaleable produce were increasing. A solution had to be found.

The solution to this common problem was imported to the Netherlands from Spain by Freek Steenks in the early 2000s in the form of the Reisopack automatic strapping machine. These machines attach plastic strapping band (which has higher tensile strength than traditional rope) around boxes and crates, leading to fewer boxes tipping over and in turn, less damage. 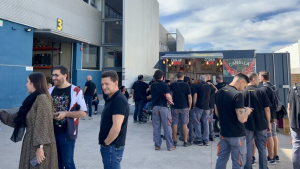 A valuable exchange of knowledge and expertise

Steenks Service makes regular trips to Parets del Vallès near Barcelona for working visits to Reisopack’s plant. These trips always have the same aim – an exchange of professional knowledge and expertise, including a sharing of experiences with strapping machines, partners and customers, and discussions about recent trends and developments in the industry. Doing this helps Reisopack and Steenks Service to support one another with continued innovation and improvements to the quality and durability of machines, both in production and delivery.

Last week’s working visit was no exception, and like all previous trips, was regarded as both valuable and informative by both parties. The only difference was the celebratory atmosphere! 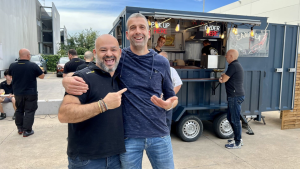 The development of Reisopack strapping machines

Reisopack’s very first machines were semi-automatic machines and could only strap pallets horizontally. Since then, strapping machines have become much more capable, and Reisopack’s machines are now able to strap various kinds of packaging, including pallets, boxes and crates, both horizontally and vertically. In addition, they can also be integrated into automated packaging lines and can be used with various kinds of strapping band.

Strapping machines from Reisopack have also found their way into other industries besides fruit and vegetables, including the food-processing industry and logistics. In addition, we have also noticed an interesting trend towards their use in the flower and plant export business, where due to continued expansion, the need for rapid, efficient and reliable strapping is on the increase.

The summer is firmly behind us, autumn is well under way and for many companies, it’s time for a big clean-up. A major clean-up at this time of year is essential so that you can head into…

The month of September was marked by two business trips to various trade fairs. At the beginning of September, Sander got ready for a visit to Närpes in Finland. In the middle of the same…

Steenks Service is being rated with an average of 9.8 out of 10 based on 22 experiences written by clients.

The Stefix 135 is exactly how we imagined it. The machine saves a lot of time, cleans really well and the employees have fun doing it!

Ideal for our purpose! Around 20 to 30 pallets are strapped with plastic crates every day.

My experience was as good as possible